However WWD.com caught up with the fashion icon yesterday where he “emphasized how his upcoming tome centers on his career in fashion journalism, not just his years of Wintour.”

I do not consider this to be a vengeful, bitchy tell-all. When the galleys were finalized and printed, the first person I gave the galley to was Anna Wintour. I sent her an e-mail saying, ‘If there is anything that you see in the galley that you would like to be removed, please tell me and I will be happy to do so.’

Well, WWD‘s piece lead me to Talley’s documentary The Gospel According To André, which according to the fashion news site gave him the confidence to write his memoir. I found the inspiring doc on hulu.com. In one particularly moving scene, while wrestling through tears, Talley shares that a woman at Saint Laurent called him Queen Kong. “I was like an ape… They were saying I was a gay ape Queen Kong.” Rather than confront the racist Saint Laurent employee, the North Carolina native buried it.

I never confronted her because these things I internalized and kept them bottled up. People always say, ‘How did you do it?’ Through my faith and my ancestors. They put up with slavery for so long. Lynchings. Voter suppression. Beatings… it all impacted me too. I had to move on. I had to get on with my career.

—André Leon Talley in The Gospel According To André

One of my favorite scenes is Talley’s candid response to a question backstage. “Is fashion art? No! Fashion is hard work, gritty…it’s not glamorous. It’s rough. The chiffon trenches. It’s rough. 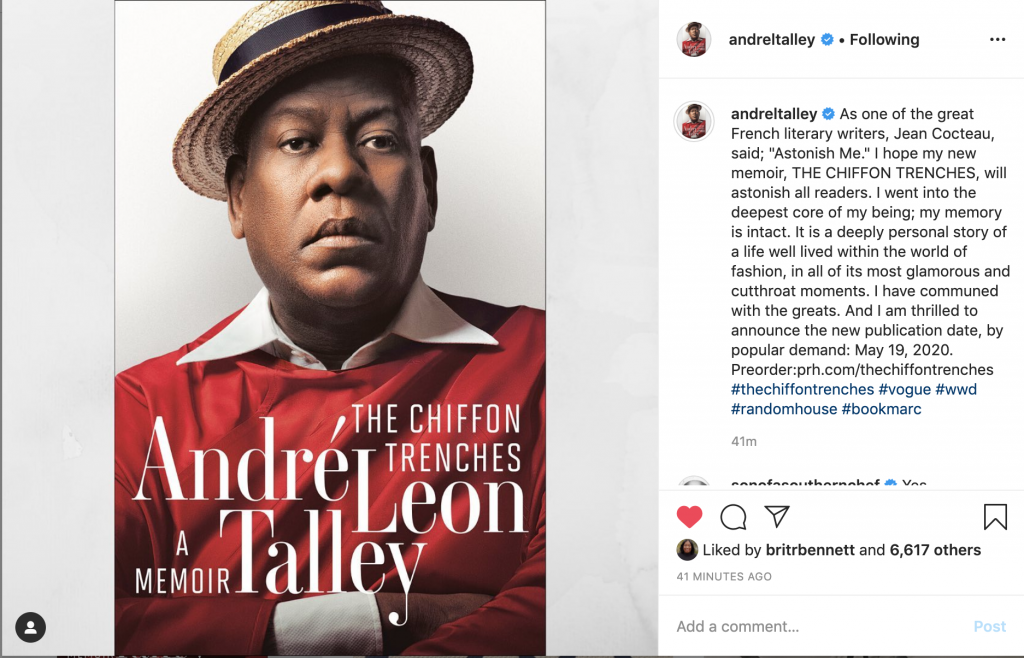 During André Leon Talley’s first magazine job, alongside Andy Warhol at Interview, a fateful meeting with Karl Lagerfeld began a decades-long friendship with the enigmatic, often caustic designer. Propelled into the upper echelons by his knowledge and adoration of fashion, André moved to Paris as bureau chief of John Fairchild’s Women’s Wear Daily, befriending fashion’s most important designers (Halston, Yves Saint Laurent, Oscar de la Renta). But as André made friends, he also made enemies. A racially tinged encounter with a member of the house of Yves Saint Laurent sent him back to New York and into the offices of Vogue under Grace Mirabella. There, he eventually became creative director, developing an unlikely but intimate friendship with Anna Wintour. As she rose to the top of Vogue’s masthead, André also ascended, and soon became the most influential man in fashion.
The Chiffon Trenches offers a candid look at the who’s who of the last fifty years of fashion. At once ruthless and empathetic, this engaging memoir tells with raw honesty the story of how André not only survived the brutal style landscape, but thrived—despite racism, illicit rumors, and all the other challenges of this notoriously cutthroat industry—to become one of the most renowned voices and faces in fashion.Woven throughout the book are also André’s own personal struggles that have impacted him over the decades, along with intimate stories of those he has turned to for inspiration (Diana Vreeland, Diane von Fürstenberg, Lee Radziwill, to name a few), and of course his Southern roots and ongoing faith, which have guided him since childhood.

The result is a highly compelling read that captures the essence of a world few of us will ever have real access to, but one that we all want to know oh so much more about.
Peace, Love, & Beauty,

Clap When You Land By Elizabeth Acevedo