ICYMI: Filmmaker Ava DuVernay is adapting the New York Times bestseller ☛CASTE: THE ORIGINS OF OUR DISCONTENTS [pub: Random House Publishing Group] by Isabel Wilkerson for Netflix according to Deadline. The Emmy-Award-winning director thanked the author for her work, Oprah Winfrey for introducing her to “the gem” and Netflix exec. Tendo Nagenda for “giving the project wings” on her Instagram yesterday. Black ♛ Fact: Isabel Wilkerson is the first African-American woman to win a Pulitzer Prize in journalism. ☛THE WARMTH OF OTHER SUNS: THE EPIC STORY OF AMERICA’S GREAT MIGRATION [pub: Random House Publishing Group] is the Washington D.C. native’s first book.

An honor. Thank you for your work, @isabelwilkerson. Thank you for introducing me to this gem, @oprah. Thank you, @tendo, for giving this project wings. May it soar and bring light. 🙏🏾

So this happened today. And I am overjoyed. Thank you, @ava, @netflix and all of the readers who have loved this book. https://t.co/GRCm6EuvW0

In this brilliant book, Isabel Wilkerson gives us a masterful portrait of an unseen phenomenon in America as she explores, through an immersive, deeply researched narrative and stories about real people, how America today and throughout its history has been shaped by a hidden caste system, a rigid hierarchy of human rankings.Beyond race, class, or other factors, there is a powerful caste system that influences people’s lives and behavior and the nation’s fate. Linking the caste systems of America, India, and Nazi Germany, Wilkerson explores eight pillars that underlie caste systems across civilizations, including divine will, bloodlines, stigma, and more. Using riveting stories about people—including Martin Luther King, Jr., baseball’s Satchel Paige, a single father and his toddler son, Wilkerson herself, and many others—she shows the ways that the insidious undertow of caste is experienced every day. She documents how the Nazis studied the racial systems in America to plan their out-cast of the Jews; she discusses why the cruel logic of caste requires that there be a bottom rung for those in the middle to measure themselves against; she writes about the surprising health costs of caste, in depression and life expectancy, and the effects of this hierarchy on our culture and politics. Finally, she points forward to ways America can move beyond the artificial and destructive separations of human divisions, toward hope in our common humanity.Beautifully written, original, and revealing, Caste: The Origins of Our Discontents is an eye-opening story of people and history, and a reexamination of what lies under the surface of ordinary lives and of American life today. 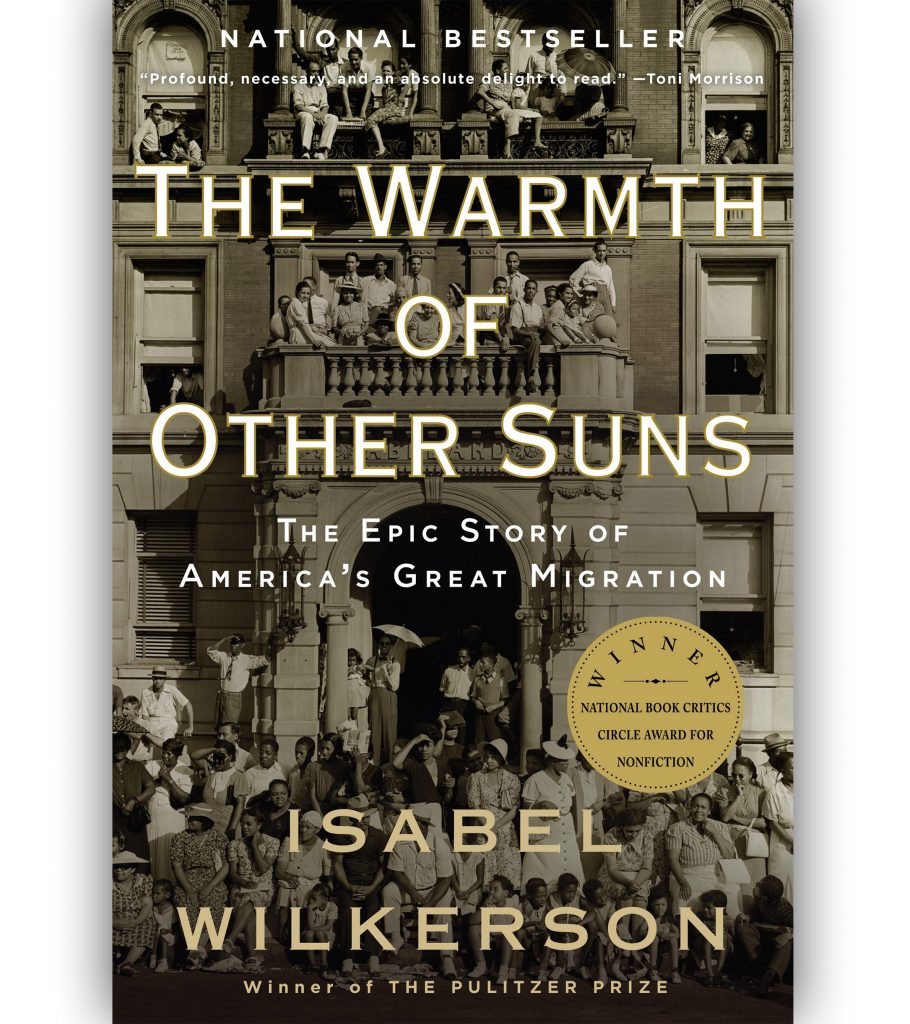 The Warmth Of Other Suns Description Per Penguin Random House:

From 1915 to 1970, this exodus of almost six million people changed the face of America. Wilkerson compares this epic migration to the migrations of other peoples in history. She interviewed more than a thousand people, and gained access to new data and official records, to write this definitive and vividly dramatic account of how these American journeys unfolded, altering our cities, our country, and ourselves.

With stunning historical detail, Wilkerson tells this story through the lives of three unique individuals: Ida Mae Gladney, who in 1937 left sharecropping and prejudice in Mississippi for Chicago, where she achieved quiet blue-collar success and, in old age, voted for Barack Obama when he ran for an Illinois Senate seat; sharp and quick-tempered George Starling, who in 1945 fled Florida for Harlem, where he endangered his job fighting for civil rights, saw his family fall, and finally found peace in God; and Robert Foster, who left Louisiana in 1953 to pursue a medical career, the personal physician to Ray Charles as part of a glitteringly successful medical career, which allowed him to purchase a grand home where he often threw exuberant parties.

Wilkerson brilliantly captures their first treacherous and exhausting cross-country trips by car and train and their new lives in colonies that grew into ghettos, as well as how they changed these cities with southern food, faith, and culture and improved them with discipline, drive, and hard work. Both a riveting microcosm and a major assessment, The Warmth of Other Suns is a bold, remarkable, and riveting work, a superb account of an “unrecognized immigration” within our own land. Through the breadth of its narrative, the beauty of the writing, the depth of its research, and the fullness of the people and lives portrayed herein, this book is destined to become a classic.

The Butterfly Effect: How Kendrick Lamar Ignited the Soul Of Black America By Marcus J. Moore

Are Y'all Watching Showtime's Adaptation Of James McBride's The Good Lord Bird?